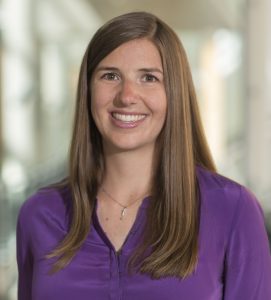 Dr. Kat M. Steele is an assistant professor in the Department of Mechanical Engineering at the University of Washington. Her research focuses upon using novel computational and experimental tools to understand human movement and improve treatment and quality of life individuals with cerebral palsy, stroke, and other neurological disorders.

Her research group strives to connect engineering and medicine to create solutions that can advance our understanding of human ability, but also translate research results to the clinic and daily life. She has previously worked as an engineer in multiple hospitals including the Cleveland Clinic, The Children’s Hospital of Colorado, and Lucille Packard Children’s Hospital.

She also co-directs AccessEngineering, an NSF-supported program to encourage individuals with disabilities to pursue careers in engineering and integrate topics on universal design and accessibility into the engineering curriculum.