Repeatability of EMG is similar between typically developing children and children with cerebral palsy. 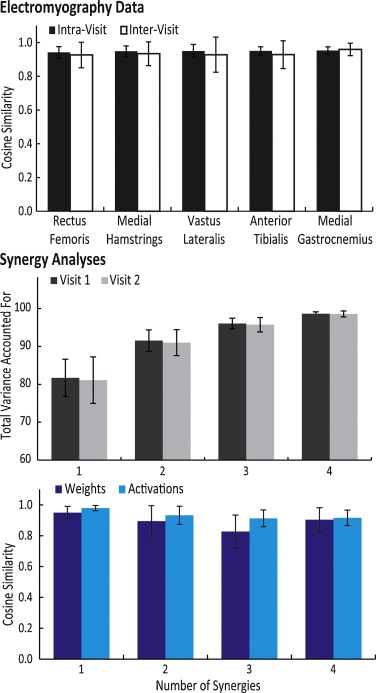 Background: Clinical gait analysis is commonly used in the evaluation and treatment of children with cerebral palsy (CP). While the repeatability of kinematic and kinetic measures of gait has previously been evaluated, the repeatability of electromyography (EMG) recordings or measures calculated from EMG data, such as muscle synergies, remains unclear for this population.

Research Question: Are EMG recordings and muscle synergies from clinical gait analysis repeatable between visits for children with CP?

Results & significance: The inter-visit variance ratios of EMG data for children with CP were similar to previously reported results for typically-developing children and unimpaired adults (range: 0.39 for vastus lateralis to 0.66 for rectus femoris). The average cosine similarity of the EMG waveforms between visits was greater than 0.9 for all muscles, while synergy weights and activations also had high similarity – greater than 0.8 and 0.9 between visits, respectively. These results demonstrate that EMG repeatability between visits during clinical gait analysis for children with CP is similar to unimpaired individuals. These results provide a baseline for evaluating whether observed changes in EMG recordings between visits reflect real changes in muscle activity or are within the range of inter-visit variability.