Journal Article in Journal of Biomechanics: 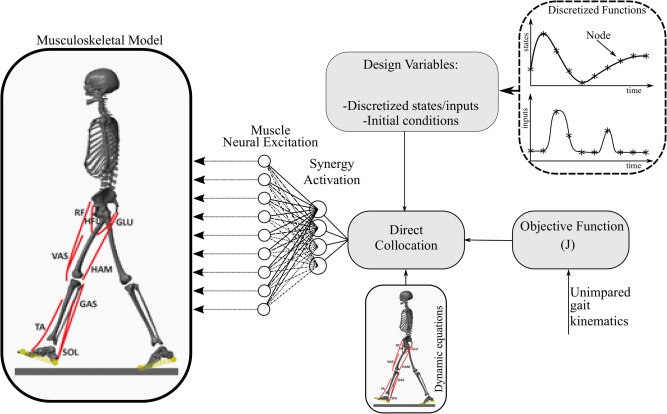 Background: Recent studies have postulated that the human motor control system recruits groups of muscles through low-dimensional motor commands, or muscle synergies. This scheme simplifies the neural control problem associated with the high-dimensional structure of the neuromuscular system. Several lines of evidence have suggested that neurological injuries, such as stroke or cerebral palsy, may reduce the dimensions that are available to the motor control system, and these altered dimensions or synergies are thought to contribute to impaired walking patterns. However, no study has investigated whether impaired low-dimensional control spaces necessarily lead to impaired walking patterns.

Methods: In this study, using a two-dimensional model of walking, we developed a synergy-based control framework that can simulate the dynamics of walking.

Results: The simulation analysis showed that a synergy-based control scheme can produce well-coordinated movements of walking matching unimpaired gait. However, when the dimensions available to the controller were reduced, the simplified emergent pattern deviated from unimpaired gait. A system with two synergies, similar to those seen after neurological injury, could not produce an unimpaired walking pattern.

Conclusions: These findings provide further evidence that altered muscle synergies can contribute to impaired gait patterns and may need to be directly addressed to improve gait after neurological injury.